On A Song of Good and Evil

A Song of Good and Evil is about how we as individuals and as societies retain our dignity and moral perspective. “Personal stories matter,” Philippe Sands concludes, and we never fear he is labouring the obvious...

Do great ideas make great art? The simple answer is “not always” and that art, like the blind man describing an elephant might be better at capturing a detail than depicting the great tide of events. But just as that same blind-man might have begun to realise, the simple answer is not always the whole answer.

The relationship of the minutiae to the larger picture, the individual to the group, the single conscience to the collective responsibility of nations is the big theme of A Song of Good and Evil. Its author and principal performer is the human rights QC Philippe Sands and the hybrid work he has created, part drama, part musical spectacle and —let’s face it— part professorial lecture, is nothing if not ambitious. Sands sets out to narrate the legal maelstrom at the Nuremberg trials as the Allied prosecutors searched in their legal bag of tricks for a concept that would capture the full enormity of the Third Reich.

Sands proceeds through an unexpected cast of characters. The first is Hersch Lauterpacht, a Cambridge academic who develops the notion of a crime against humanity – or an act so self-evidentially heinous that its perpetrators cannot shelter in the bushes of local laws and national sovereignty. This concern for the universal rights of the individual is brushed aside by the jurist Rafael Lemkin, who has a mad inventor’s obsession to try the Nazi leadership for genocide —a crime he has himself devısed. The first concern is for the protection of the individual, the second the protection of the group. 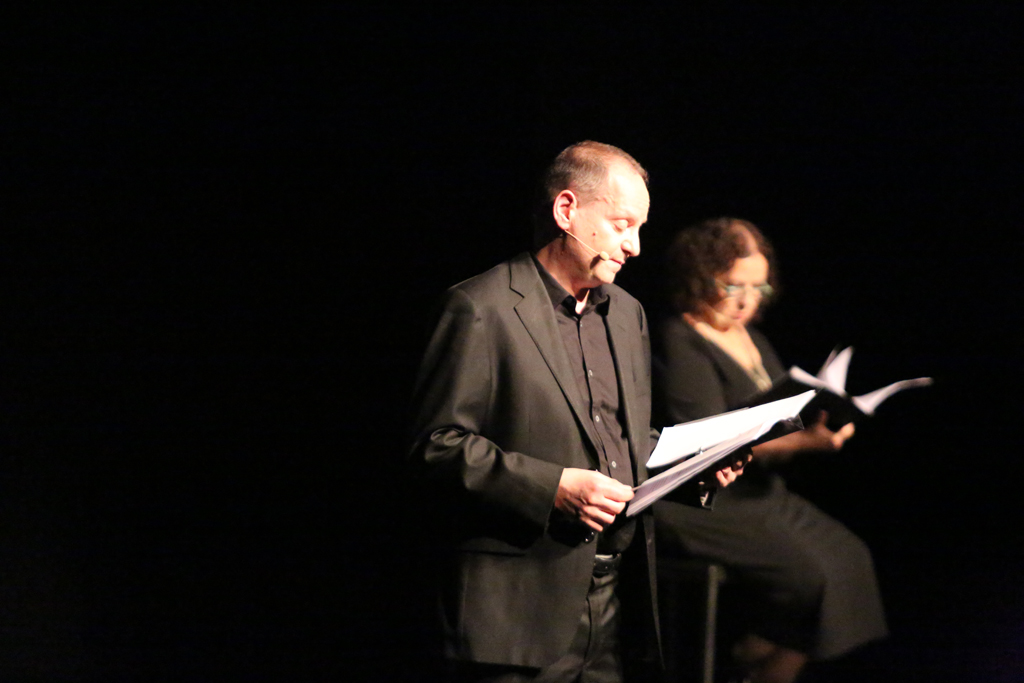 The two men never met, but what haunts Sands as much as the juridical debate that divides them is the web of happenstance that binds them together. Both were educated at the same law faculty, albeit a few years apart, in what is now the Ukranian city of Lviv but which has had as many names —Lwów (Polish), Lvov (Russian), Lemberg (German)--as it has had conquerors – not to mention the Yiddish Lemberik or the original Latin Leopolis. “They studied at the same university, walked the same streets, entered the same buildings, had the same teachers…” And both men became key figures in the development of human rights and international criminal law.

Lviv is also visited by the third character in the drama – Hans Frank, the governor general of occupied Poland who will be one of the Nuremberg defendants condemned to hang — a man whose thick veneer of charm and culture adheres to a corrupted soul. And in the infinite cat’s cradle of serendipity, Lviv figures in Sands' own history —it is where his grandfather was born– and a place he himself is compelled to visit. Sands also studied law under Eli Lauterpacht at the Cambridge centre that bears his father Hersch’s name and much later discovers that his own great-grandmother and Lauterpacht were born on the same street in the small town of Zolkiew. The more aching coincidence is that she was only a few weeks ahead of Lemkin’s parents on the train to extermination camp of Treblinka.

“Personal stories matter,” Sands concludes, and we never fear he is labouring the obvious.

This is Kurt Vonnegut in reverse: It is not that coincidence is a snare to intellect, a mirage that leads us to see meaning where there is none, Rather we start with the holocaust –the epitome of an empty universe and of nihility without end— and we use our own histories and connections to construct hope and humanity. “There is a crack in everything.” Sands hears the words form Leonard Cohen’s Anthem on the radio as he takes his son to visit Treblinka. “That’s how the light gets in.”

There is much music in A Song of Good and Evil – hauntingly performed by the pianist Guillaume de Chassy and the bass-baritone Laurent Naouri. It is the glue which holds the piece together and at the same time another strand that unites the characters in space and time. Prosecutor and defendant both listened to the same Beethoven sonata, took solace from Bach’s St Mathew’s Passion. The disconnect between culture and conscience is an enigma not just for Sands but also for the post-War European sensitivity.

“Nothing in the next-door world of Dachau impinged on the great winter cycle of Beethoven chamber music played in Munich. No canvases came off museum walls as the butchers strolled reverently past, guide-books in hand,” the literary critic George Steiner wrote in his famous 1971 lecture series In Bluebeard’s Castle.

Indeed, we discover that Frank commissioned Dr Baedeker to write one of his famous guides for occupied Poland and that among the great works he took home to Bavaria for “safekeeping” after the war was Leonardo da Vinci’s painting of Cecilia Gallerani, the Lady with an Ermine, painted in 1489. Sands befriends Frank’s son Niklas who told him that as a young boy he was made to stand in front of the portrait and part his hair, just like Cecilia Gallerani. 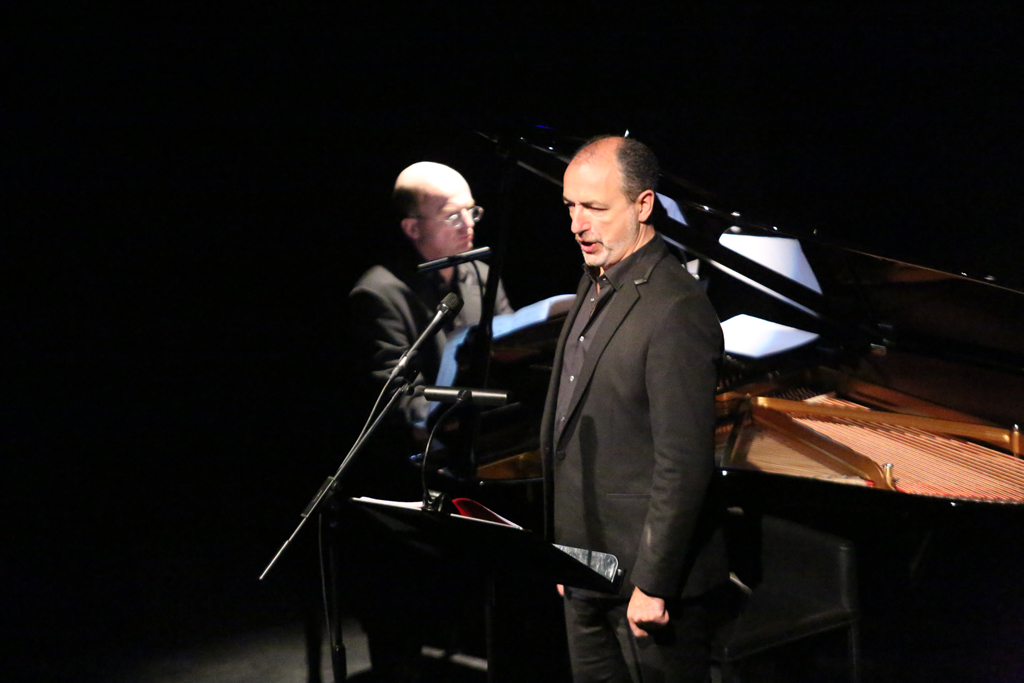 The happy co-existence of art and atrocity resurfaced in Istanbul in an extraordinary production by the Dutch-Belgium theatre companies Toneelhuis and Toneelgroep who managed to strip the War-and-Peace-scale novel Les Bienveillantes (the Kindly Ones) down into a small but evocative ensemble piece. Here we explore through the eyes of an SS officer –a sort of quick-witted Forrest Gump— not so much the banality as the ingenuity of evil, the firewall between what we believe and what we do-- and how we are capable of slipping into a pool of darkness.

A Song of Good and Evil is not that. It is more about how we as individuals and as societies retain our dignity and moral perspective in that same void. Its theatricality is of course of a very different nature from a workshopped drama —spectacle bubbles just occasionally to the surface– but packs a punch when it comes. The last thing one might expect in so pedagogical a performance is a coup de théâtre but there was one moment when my jaw literally dropped open. We are shown a slide of Niklas Frank briefly reunited with the da Vinci painting some 70 years on, standing before where it originally hung in Krakow’s Wawel Castle. “I am allowed to take a single photograph, to capture the moment,” Sands narrates. Only moments before we learn that Niklas Frank so many years later still carries with him a newspaper clipping of his father’s body, fresh from the gallows – “to remind myself that he is truly dead.”

A Song of Good and Evil by its very nature is not often performed. Its cast have day jobs be it at the European Court of Human Rights or the Metropolitan Opera. This may explain why the performance has the air of a sophisticated after dinner entertainment than a West End show, substituting commitment for theatrical pyrotechnics. The İstanbul performance took place at the end of April in the acoustically correct if politically unsound Zorlu Center for Performing Arts (the shopping and office complex in which it is housed squats like King Kong on the İstanbul skyline). The Turkish actress Deniz Türkali taking the part which Vanessa Redgrave had in London as the foil for Philippe Sands’ narrator. With a few performances under her belt, it is clear that Türkali would have better matched a more declamatory style to Sands’ confiding tone.

The İstanbul debut was something of an accomplishment – a coming out party for P24’s on-line literary review, K24. P24 is trying to relocate K24 from the virtual world to the real in the form of what it calls KIRAATHANE. The word has come to mean coffee house but its more literal origins is as “House of Discourse” — a place where centuries past, clients would not so much sip Starbuck lattes as read or be read to. The KIRAATHANE which P24 intends to create will be more like the literature houses that exist in Germany or Norway — a permanent book-based cultural centre with a crowded programme of events.

In that sense A Song of Good and Evil was an ambitious foretaste of what is to come — complete with a programme that contained the complete bilingual text, cleverly assembled by the graphic artist Bülent Erkmen. There was also a special addition for a Turkish audience for whom the debate over the crime of genocide will not have been lost. While it may or may not be apocryphal whether Hitler took his lead for the final solution from the Ottoman’s treatment of the Armenians, Sands suggests that Lemkin was clearly influenced by those events. It is worth giving a taste:

Sands: On the occasion of this first performance in İstanbul and Turkey, you may be interested to know that in later years Lemkin wrote of a “picturesque and most sensational” trial held in Berlin in June 1921, just before he started his studies in Lwow. The defendant was a young Armenian, Soghomon Tehlirian, who had assassinated former Ottoman government minister Talaat Pasha in Berlin…The jury took less than an hour to reach a “not guilty” verdict. The finding provoked a commotion in the courtroom.

Türkali: “I discussed this matter with my professors.” Tehlirian should not have acted as a “self-appointed legal officer for t he conscience of mankind,” Lemkin wrote, seeking to uphold a global moral order, but the murder of innocent people should not go unpunished… Tehlirian did the right thing.’’

Sands: ‘’What about sovereignty, the state’s right to treat its citizens as it wished?’’ the professor asked.

Türkali: “Strictly speaking, you are correct, dear Professor: international law allowed a state  to do what it wished back then, but sovereignty wasn’t meant to allow a state ‘the right to kill’ millions of innocent people.” “Did the Armenians ever try to have the Turk arrested for the massacre?”

Sands: “There wasn’t any law under which he could be arrested.

Türkali: “Not even though he had a part in killing so many people?”

Sands: “Let us take the case of a man who owns some chickens. He kills them. Why not? It is not your business. If you interfere, it is trespass.”

Türkali: “The Armenians were not chickens.”

Sands: “When you interfere with the internal affairs of a country, you infringe upon that country’s sovereignty.”

Türkali: “So it’s a crime for Tehlirian to strike down one man, but not a crime for that man to have struck down one million men?”

A Song of Good and Evil: Text by Philippe Sands; directed by Nina Brazier; produced by P24 at the Zorlu Center for Performing Arts (one night only: 29 April 2016)
(The Kindly Ones performed by Toneelhuis and Toneelgroep as part of the 20th İstanbul Theatre Festival at the Uniq Hall, İstanbul 6-8 May 2016. Text: Jonathan Littell Adapted by: Guy Cassiers, Erwin Jans, directed by Guy Cassiers)
YAZARIN TÜM YAZILARI